On October 30, 2014, the Locally Preferred Alternatives (LPAs), developed as part of the Central Oklahoma Commuter Corridors Study, were approved by the ACOG Intermodal Transportation Policy Committee (ITPC). The approval of the LPAs marked the completion of an 18-month study by consultants from URS Corporation and ACOG staff to determine the feasibility of high capacity transit within the Central Oklahoma region.

The Commuter Corridors Study, CentralOK!go, focused on three commuter corridors originally identified in the 2005 Regional Fixed Guideway Study, which recommended a variety of potential transit corridors throughout the region for further study. The CentralOK!go corridors emanate from the Santa Fe Station in downtown Oklahoma City and extend north to downtown Edmond, east to Midwest City and Tinker Air Force Base, and south to SH-9 in Norman.

Although the three corridors were examined individually, they were also viewed as a system that could provide the initial structure of a regional transit network for Central Oklahoma, along with the planned downtown Oklahoma City streetcar and an expanded bus network.

The North Corridor
The North Corridor extends 14 miles between the Santa Fe Station and downtown Edmond. Initially, seven facilities were identified and evaluated as potential transit alignments. Following a draft evaluation of the potential alignments, three preliminary alignments, coupled with potential transit modes, were evaluated in more detail to determine potential ridership, costs, technical feasibility, and compliance with the goals established by the CentralOK!go Steering Committee, stakeholders, and the public. The Steering Committee ultimately recommended that a one-seat ride via commuter rail between downtown Edmond and SH-9 in Norman, with service to the Santa Fe Station. Additionally, a five mile extension of the downtown Oklahoma City streetcar was recommended to run along Classen Blvd from NW 10th St to NW 63rd St.
The commuter rail is expected to see 5,700 riders per day (between Edmond and Norman), while the streetcar could have another 2,100 daily riders. Capital costs for the commuter rail are estimated to be between $260 and $360 million and the streetcar extension is expected to cost between $270 and $370 million. Operating costs for the North Corridor are estimated at $7.5 million per year total, $5 million for commuter rail and $2.5 million for the streetcar. All costs are estimated in 2013 dollars. 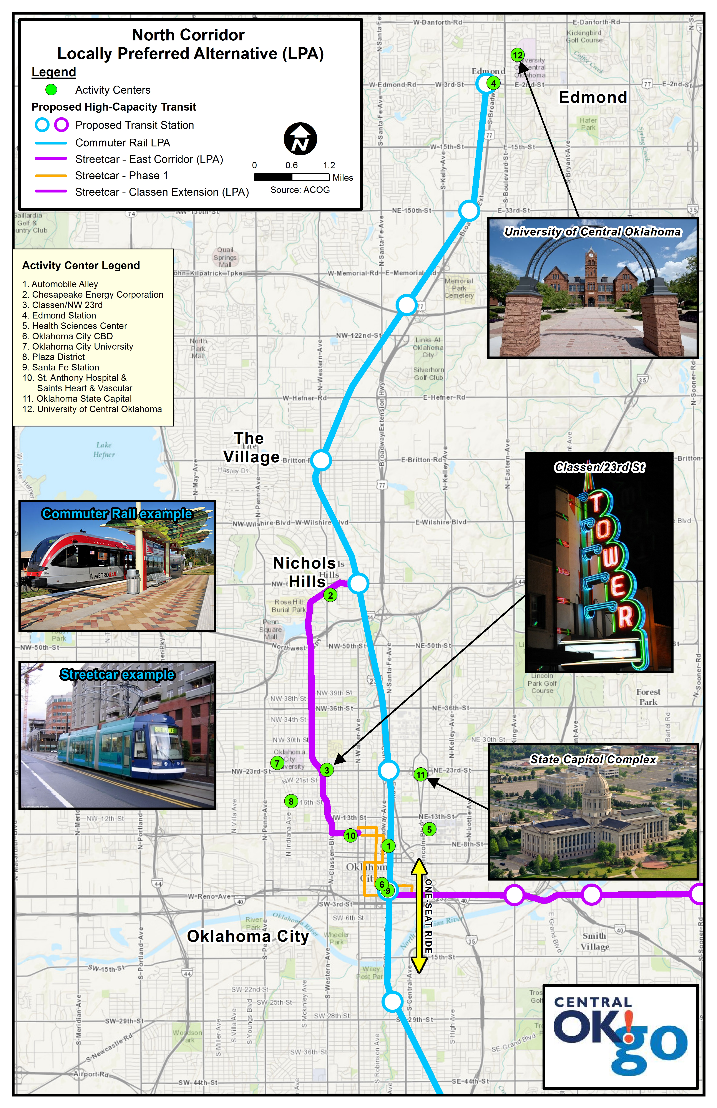 The East Corridor
The East Corridor spans approximately 9 miles from the Santa Fe Station to Del City, Midwest City and Tinker Air Force Base. Seven alignments were initially identified and evaluated as potential transit alignments, with the most feasible alignments and transit modes studied further to determine potential ridership, costs, technical feasibility, and achievement of the goals developed by the RTD Steering Committee, stakeholders, and the public from the East Corridor. The recommended alignment from the CentralOK!go Steering Committee is a streetcar technology along E. Reno Ave and an abandoned railroad right-of-way through Midwest City. 2,300 riders are estimated to use the service each day. The streetcar will provide direct service to Santa Fe Station and was recommended to tie into the downtown Oklahoma City streetcar system and the Health Sciences Center through a future extension using the same vehicle technology. Additionally, an internal circulator on Tinker AFB will be needed to optimize ridership. Capital Costs for the East Corridor LPA are expected to cost between $320 million and $440 million and operating costs are estimated at $2.5 million per year. 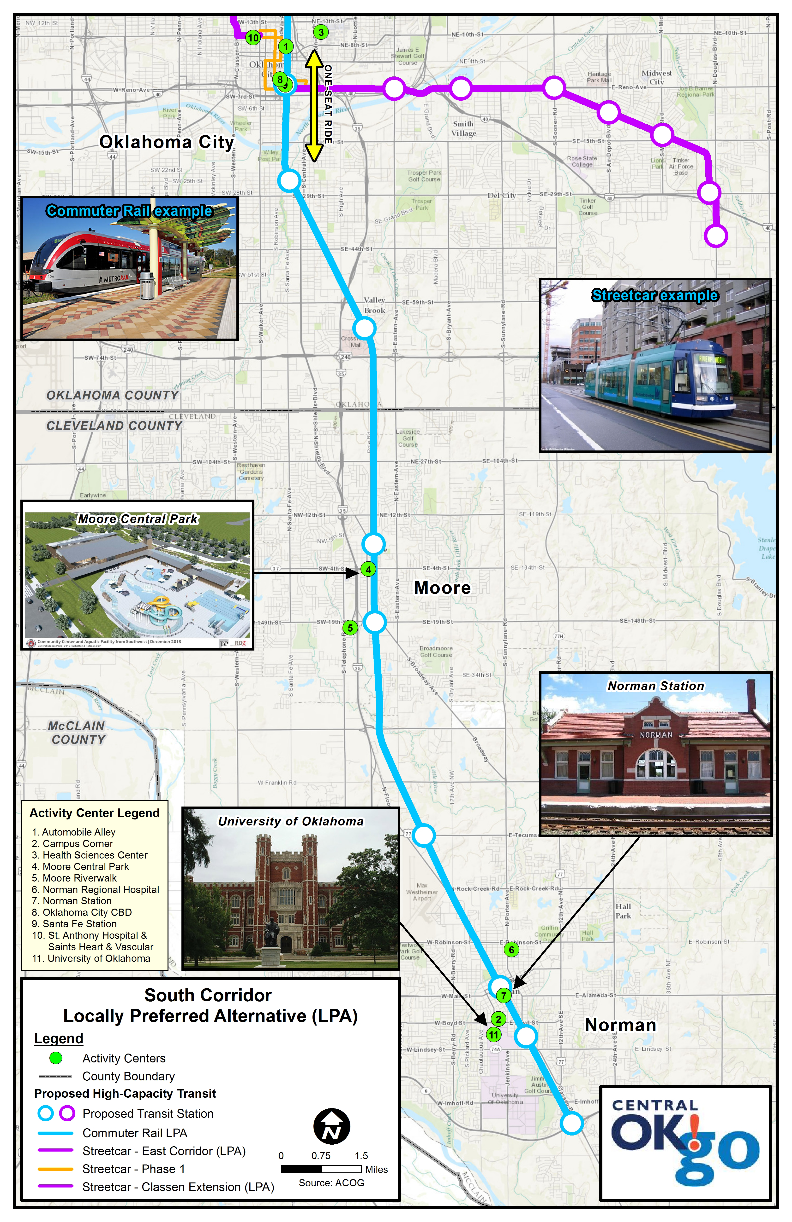 The South Corridor
The South Corridor extends 17 miles between the Santa Fe Station and State Highway 9 in Norman. Initially, seven different alignments were identified and evaluated as potential high capacity transit alignments. After the more feasible preliminary alignments were subjected to the same in-depth analysis as the previous corridors, the alignment utilizing the BNSF railroad right-of-way was recommended by the RTD Steering Committee. The LPA calls for a commuter rail technology with a one-seat ride between Edmond and Norman, and extends south of the University of Oklahoma to SH-9. 5,700 riders are estimated to use the commuter rail service between Edmond and Norman. Capital costs for the South Corridor are estimated between $310 and $410 million, while operating and maintenance costs are expected to be about $5.5 million per year.

Now that the Locally Preferred Alternatives have been formalized, next steps include developing partnerships to establish a regional transit district and authority and identifying funding sources for the system. Currently, ACOG staff and a subcommittee of the Regional Transit Dialogue (RTD) Steering Committee are working on the framework for a Regional Transit Authority (RTA), which could oversee the construction, operation, maintenance, and financing of a regional transit system in Central Oklahoma. The subcommittee will examine potential funding sources and engage local leaders about the benefits of regional transit in the coming months. Additionally, environmental and engineering studies, design work, and operating plans will need to be completed in cooperation with the Federal Transit Administration.