According to APA, the Great Places in America program recognizes unique and exemplary streets, neighborhoods, and public spaces — three essential components of all communities.

“Our Great Places in America designees highlight the many facets that make up planning — from community engagement, quality of character, and economic development,” said Cynthia Bowen, FAICP, president of APA. “These neighborhoods, streets, and public spaces illustrate how a community coming together creates lasting value. It is an honor to recognize these outstanding places as a countdown to National Community Planning Month.”

Proud Guthrie citizens and stakeholders gather on the steps of the Publisher’s Museum in Guthrie, Oklahoma, to commemorate being named a Great Place in America by the American Planning Association.

APA Great Places showcases the best examples of where and how people work and live every day. They are defined by many characteristics including:

The 290 Great Places designated to date are located in all 50 states and the District of Columbia.

Great Places in America is one of the ways APA starts the countdown to National Community Planning Month each October, a month-long event celebrating the accomplishments of the many residents, leaders, officials, and professionals who contribute to making great communities through the planning process.

Again this year, APA seeks further input from the public for the “People’s Choice” designee. Nominate a favorite Great Place by commenting on APA’s Facebook page, Twitter or Instagram feed using hashtag #APAgreatplaces from October 1–12. Online voting will take place the second half of October, with the “People’s Choice” Great Place designee being announced November 7.

The 2018 Great Places in America designees are listed below alphabetically and are not ranked.

To learn more about each of this year’s designees, visit www.planning.org/greatplaces.

The American Planning Association is an independent, not-for-profit educational organization that provides vital leadership in creating great communities for all. APA and its professional institute, the American Institute of Certified Planners, are dedicated to advancing the profession of planning — physical, economic and social — to foster quality of life for all residents. The 40,000 members work in concert with community members, civic leaders and business interests to create communities that enrich people’s lives. Through its philanthropic work, the APA Foundation helps to reduce economic and social barriers to planning. APA has offices in Washington, D.C., and Chicago.

The following information provided by the American Planning Association

Although rural Guthrie, Oklahoma, has faced economic struggles in the past, Guthrie Historic District is a neighborhood that fosters creativity and community involvement. Embracing its historic character has been a key to simultaneously improving the health of residents, creating a welcoming place for visitors, and bolstering the local economy of this Oklahoma town. 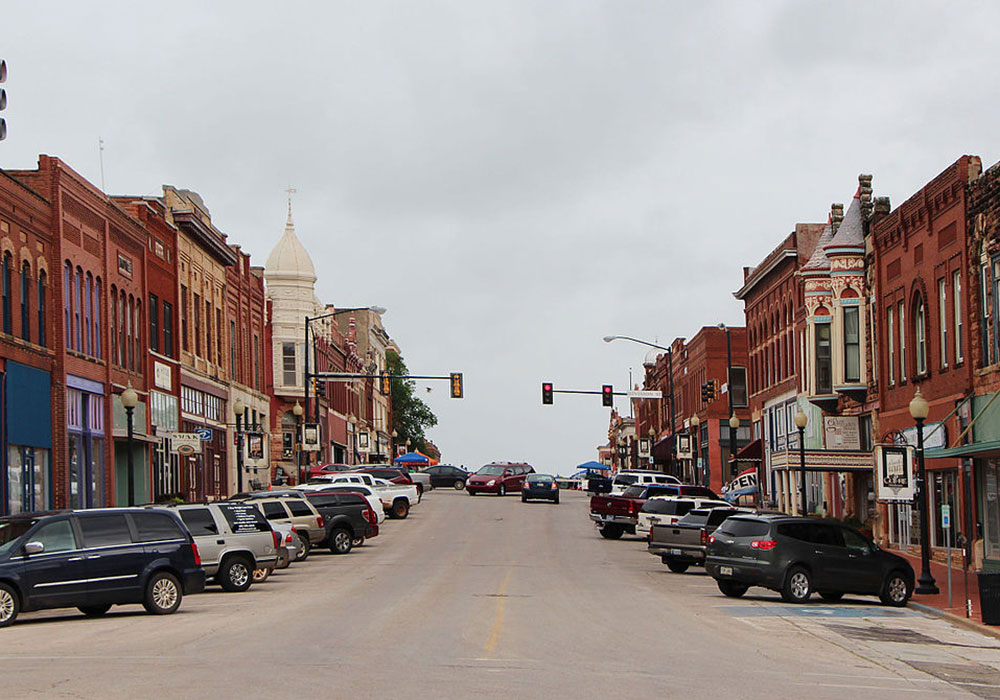 A street in Guthrie’s downtown district, which features ground-level commercial space and apartments above. Photo courtesy City of Guthrie.

Guthrie was established in 1887 as a railroad station stop, gaining residents and development during the Land Run of 1889, and later becoming the capital of Oklahoma in 1907. During financial struggles and population loss in the mid-20th century, the impoverished town lacked the resources to demolish its urban center, thus providing the intact historic core that remains today.

The Guthrie Historic District, designated as a National Historic Landmark in 1999 — and the largest historic urban district in the state of Oklahoma with more than 2,000 buildings — is significant for its collection of late 19th and early 20th-Century commercial architecture. The historic bones of Guthrie provided a canvas on which the city proactively implemented innovative health-focused initiatives, such as a complete streets ordinance, especially significant in a small, rural town.

Guthrie was the second city in Oklahoma to adopt a complete streets ordinance. Over the past few years, bike racks have been placed throughout downtown, and the city is in the process of connecting downtown to multiple parks with trails and bike lanes. Additionally, Guthrie has its own on-demand transportation system, the First Capital Trolley, an uncommon amenity for a small (roughly 10,000 people) community.

The streets host multiple events, including an Open Streets event, which has received statewide recognition for its growth and urban planning. Guthrie was recognized for six years in the Certified Healthy Oklahoma Program, in part for its wide sidewalks and overall quality of life design elements, and is looking forward to adding a new downtown wayfinding kiosk that will provide residents and tourists the walking distance to historic buildings. 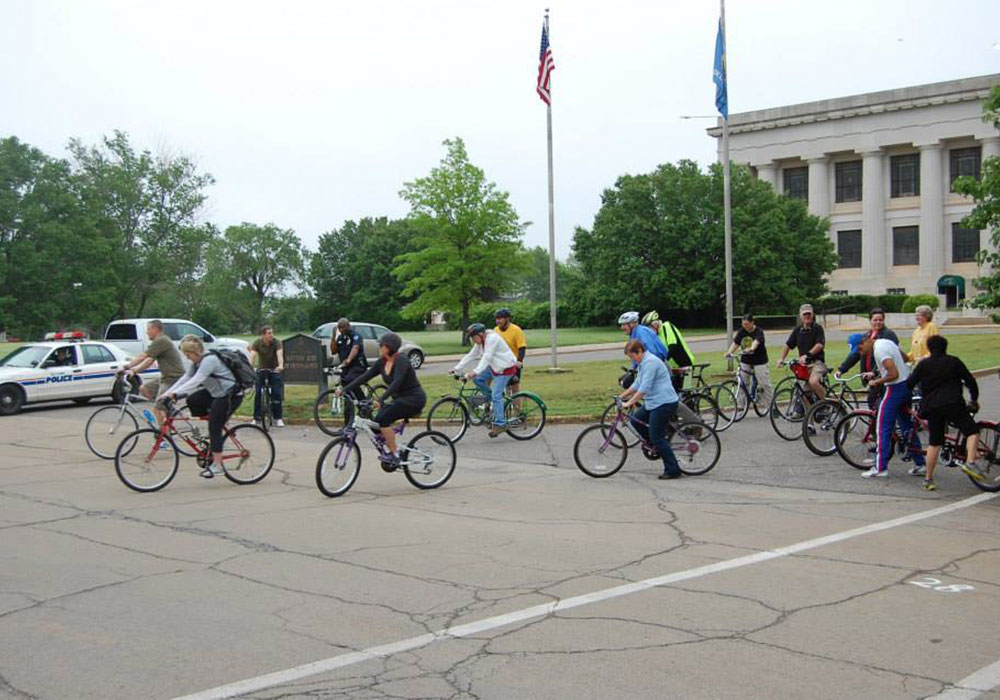 The University of Oklahoma Institute of Quality Communities partnered with Guthrie to study the economic impacts of a Mumford and Sons tour, and ultimately provided the city with increased tax revenue to use for grant programs to enhance safety for people walking and biking in the district.

Historic Downtown Guthrie is one of eight Oklahoma communities to be awarded a Creative Community designation. The focus of Guthrie’s designation is the Elbow — once an African American neighborhood, and now a large undeveloped greenspace — with the hope of activating the overgrown area with increased accessibility by trail network and collaboration with the arts community. The City of Guthrie is working with the local communities and a district school to enliven the area with vibrantly painted crosswalks.

Innovative planning, embracing the past, and fostering partnerships with local schools and universities have helped Guthrie to creatively envision downtown economic development, and to bring vitality to the historic core for both residents and visitors. 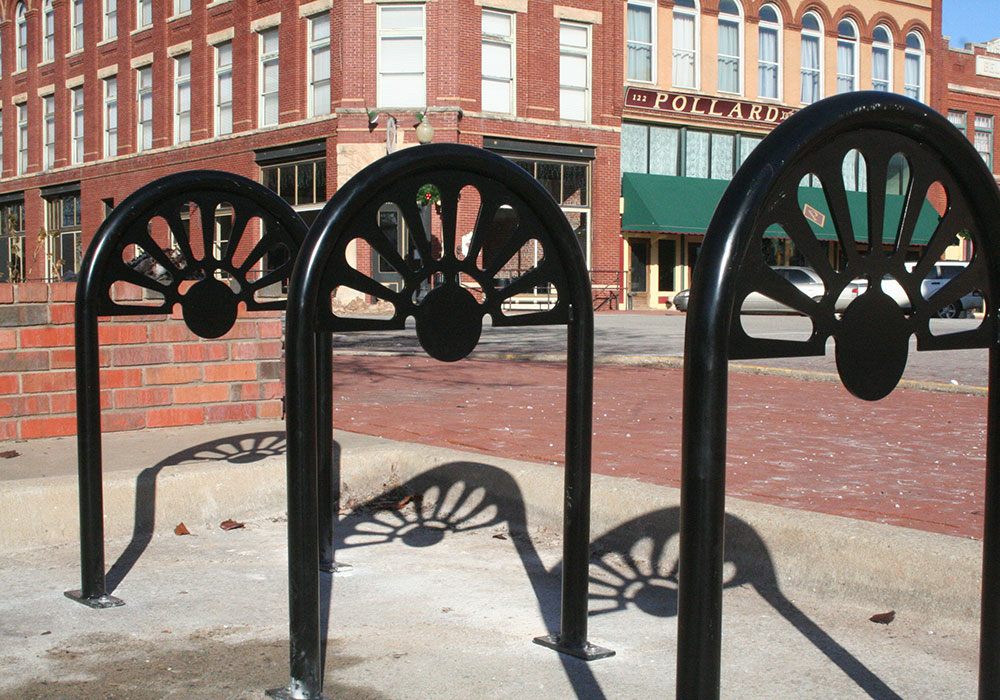