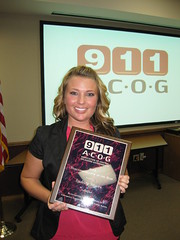 Sydney Myers, of the Nichols Hills Police Department, was honored as 9-1-1 ACOG’s Dispatcher of the Year during an awards ceremony in April that coincided with National Public Safety Telecommunicators Week. Myers was nominated by her supervisors for her exemplary actions. National Public Safety Telecommunicators Week is held every year in April to highlight the critical, life-saving work of 9-1-1 dispatchers. For the past four years, 9-1-1 ACOG staff has developed extensive programs recognizing the hundred of dispatchers in Central Oklahoma that serve our region every day.