It’s hard to grasp the enormous impact of recent storms in Central Oklahoma. However, GIS software and geographic data that ACOG has on hand as part of ongoing transportation planning efforts can help to quantify this destruction.

Because it caused extreme damage in a large but fairly concentrated area, a good candidate for a quick analysis is the May 20th tornado that affected Moore, Newcastle, and far south Oklahoma City. Using available aerial imagery captured the day after the disaster, two shapes were digitized (drawn): one around areas that appear to be heavily damaged, and another around areas that appear to be totally destroyed.

Based on these shapes, the damage path stretches from south of Highway 37 in Newcastle to east of Sooner Road in southeast Oklahoma City, a distance of roughly 12.2 miles. This includes a particularly destructive traversal of the entire City of Moore that is at one point (near Plaza Towers Elementary) roughly two-thirds of a mile wide. The tornado destroyed structures in 960.9 acres (1.50 square miles) and heavily damaged structures in an additional 3,275.2 acres (5.12 square miles), for a total of 4,236.1 acres (6.62 square miles). Of this total acreage, over half (57%) falls within the city limits of Oklahoma City. Most of this area is sparsely populated, so the most dramatic damage appears within more densely-populated Moore even though it only contains 31% of the damaged area. 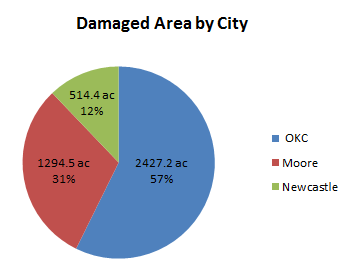 Once digitized, these shapes can be used to query existing geographic data, which should help to elucidate what exactly was damaged and destroyed in this acreage. ACOG’s land use data tells us if a particular piece of land contains an occupied structure that could have been damaged or destroyed by the tornado, and if so, the type of structure. Extracting land use data for only the area damaged by the tornado reveals that 42% of the area in the damage path is coded as a type of land use that contains occupied structures. The remaining 58% of the area was coded as one of several vacant land uses, including transportation corridors, agriculture, planned development, parks, and open space. 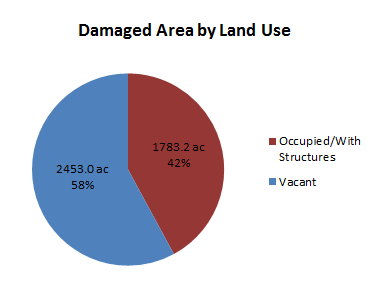 Removing these unoccupied uses from the analysis and focusing in on the destroyed area gives us a better picture of what may have actually been destroyed by the tornado. A vast majority of the occupied land use in the destroyed area appears to be residential: Single-Family Residential and Suburban (Rural) Residential combine to make up 87% of the total (388.6 acres). 7% of the occupied destroyed area is coded as Public/Institutional: this includes Briarwood Elementary, Plaza Towers Elementary, and Moore Medical Center. Office, Commercial, and Industrial land uses make up the relatively small remainder. 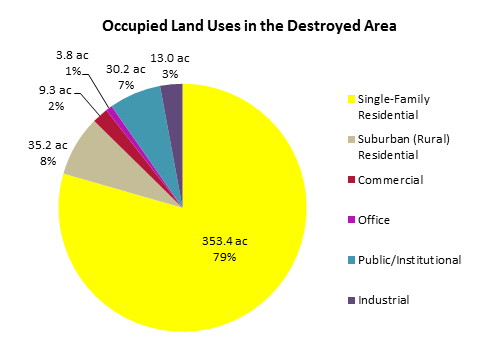 Tax parcel data can give us an idea of the monetary value of destroyed property in this area. However, ACOG does not currently have tax parcel data for McClain County, so the damaged area in Newcastle (12% of the total) cannot be included here. Selecting parcels that intersect (overlap, fully or partially) the destroyed area in Cleveland County yields 1,341 parcels.  The total assessed value for these parcels is $166.6 million, $142.7 million of which is improvement values.

Hypothetically, this means that if every taxable improvement (houses, businesses, barns, outbuildings, and taxable business property) was totally destroyed in every tax parcel that touches the destroyed area and nothing were rebuilt, $142.7 million would be removed from Cleveland County’s property tax rolls next year before tax exemptions. This entire area is served by Moore Public Schools, which (according to the most recent information available on Cleveland County’s website) collects property taxes at an annual rate of 64.66 mills (thousandths of a dollar). This means that MPS could hypothetically lose up to $9.2 million per year in funding, a huge burden on a school district now tasked with replacing two elementary schools and repairing other facilities. Since a vast majority of the area will soon be rebuilt, this scenario is of course unlikely to come to full fruition.

The specter hanging over this analysis is the fact that it does not include financial losses due to damage to tax-exempt churches and public property, centrally-assessed property including cell towers and utility networks, personal property in destroyed/damaged structures, and vehicles. It also does not include any damage to structures in McClain County, damage to structures outside of the destroyed area in Cleveland County, and lost business revenue due to storm-related closures. This is why the wide-ranging damage estimations by officials and insurers are so much higher.

Moreover, no quantitative estimation can hope to describe the emotional toll of the storm. However, analyses such as this have a role to play because they can lend perspective, especially as data quality, data availability, and analytical power of GIS software all continue to improve.