With ongoing discussions about streetcars and other fixed-guideway transit options in the region, it is important to note that streetcars are not new to Central Oklahoma. In the days before well-paved streets and near-ubiquitous automobile ownership, electric streetcars were common in American cities, and Oklahoma City was no exception. Originally operating from 1903 to 1947, an extensive system of electrified streetcar routes radiated from a central terminal at what is now Sheridan and Hudson in downtown Oklahoma City. Interurban routes using the same technology extended the system west to El Reno, north to Guthrie, and south to Norman.

Beyond odd jogs in the modern street grid and a small handful of locations where track was not completely removed, very little of the old system remains. However, since the system was the primary means of transportation for many citizens, it helped to shape and guide development in inner portions of the city in a way roughly comparable to the modern concept of transit-oriented development. The fact that early real estate developers including Anton Classen, John Shartel, and others controlled the privately-owned system and guided streetcar lines to their land holdings also influenced growth patterns of the young city.

Largely built upon previous research by local historian/blogger Doug Loudenback, the interactive map below represents the efforts of agency staff to document the routes taken by streetcars in the historical system. 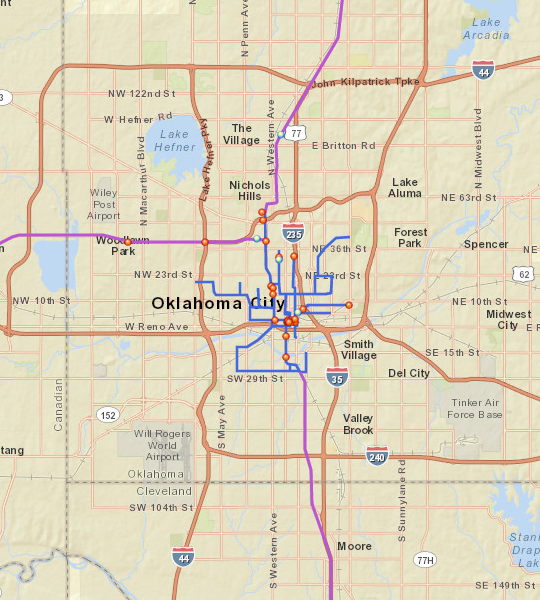 Click on the image for an interactive ArcGIS map

Blue lines indicate urban streetcar routes while purple lines depict the interurban routes to El Reno, Norman and Guthrie; click the routes to show the route name, construction year, and year of abandonment where this information is available. Blue dots show locations where vestiges of the old system are still visible on the ground; click these for a description. Click the red dots to display photos of streetcars and various components of the system in operation.