In 2015, B&H Construction, an Oklahoma company specializing in utility networking, excavation, and directional drilling opened a 24-hour high-capacity public compressed natural gas (CNG) station at I-35 Exit 104 near Goldsby. In addition, the company currently has 73 CNG trucks in its fleet comprised of everything from tractor-trailers to Ford F150’s. 43 CNG trucks were added in 2015 alone. They also provided outstanding technical assistance to other Central Oklahoma companies considering CNG fleet conversion.

“The steps taken by B&H Construction in opening a public CNG station, converting its fleet, and sharing their experience and expertise have been remarkable” said Eric Pollard, Coordinator of the Central Oklahoma Clean Cities Coalition. “Their leadership on alternative fuels improves our air quality and assures greater energy security for our region.”

The City of Midwest City will receive the public stakeholder award for years of alternative fuel leadership. Midwest City’s fleet services department manages 1,400 pieces of fueled equipment, and the fleet is powered by one of the most diverse fuel portfolios in Oklahoma. In 2012, the City built new infrastructure for biodiesel and ethanol fueling capabilities. The City has converted a number of refuse trucks to CNG and plans to add additional CNG vehicles to its fleet.

The City of Midwest City’s Fleet Services Department is the first governmental automotive repair facility in Oklahoma to earn the Blue Seal of Excellence recognition from the National Institute for Automotive Service Excellence (ASE).

“Midwest City’s commitment to excellence in their fleet operations greatly advances the mission and goals of the Central Oklahoma Clean Cities Coalition,” said John G. Johnson, Executive Director of ACOG. “Midwest City and all Central Oklahoma residents can be proud of their achievements.”

This year marks the 20th Anniversary of the Central Oklahoma Clean Cities Coalition. ACOG, in partnership with the Oklahoma Department of Commerce, the Oklahoma State Energy Office and the U.S. Department of Energy, established the coalition in 1996. The coalition’s primary goal is to advance the use of alternative fuels and fuel savings technologies in vehicle fleets across the state.

In 1996, very few alternative fuel stations were open to the public. Thanks to Central Oklahoma Clean Cities stakeholders, Oklahoma leads the nation in publicly available CNG stations per capita at 93, has more than 50 propane stations, 39 electric vehicle chargers, and 14 ethanol stations.

Clean Cities stakeholders, through the use of alternative fuels and other fuel savings projects, displaced more than 6.5 million gallons of petroleum in 2014, and 18 million gallons since 2009. 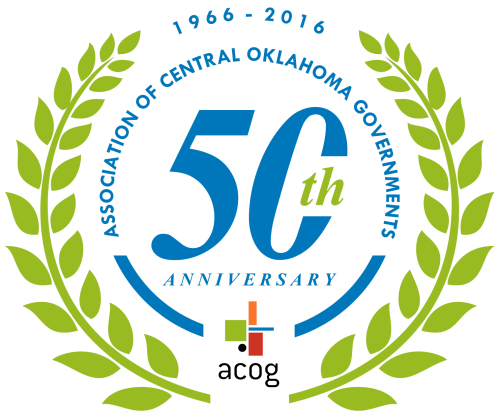