The number one cause of roadway congestion in Central Oklahoma is traffic incidents. Oklahoma does not have an unusual number or crashes per capita, ranking 21st in number of fatal crashes per 100 million miles traveled, but the traffic delay caused by a crash blocking travel lanes makes up approximately 60 percent of all congestion on the region’s roadways. Drivers can help reduce travel delay, chance of secondary crashes and overall cost spent on congestion by remembering to quickly clear the roadway if you are involved in a minor crash. In fact, it’s the law.

In 2003, ACOG, in conjunction with heads of transportation and first-responder agencies, drafted Quick Clearance legislation that requires motorists who are in an automobile crash to move their vehicle off the main roadway as soon as possible in order to quickly restore normal traffic flow.  Once all parties are known to be safe and uninjured, the law requires drivers to move all operable vehicles out of the lanes of traffic. If involved in a non-injury crash, drivers should pull off the highway into a well-lit parking lot or out of the moving-traffic lane to exchange information.  If the vehicle is no longer running, Oklahoma Highway Patrol or one of their designees, such as a wrecker driver, is legally authorized to move the disabled vehicle off the roadway in order to get traffic flow in all lanes back to normal.

For every minute a crash remains on the roadway, the chance of a secondary crash attributed to the initial crash increases by 2.8 percent. (FHWA)

Secondary crashes are usually minor incidents occurring because of an initial crash being worked on the roadway. These collisions can be in the same or opposite lane of travel as the initial incident and are usually no more than a fender bender. Although secondary crashes are generally minor, they compound the congestion problems by having a new crash for onlookers to gawk at, thus creating a longer queue of congestion. This situation not only creates more delay for the traveler but unnecessarily puts more first responders in harm’s way to work a different crash in the already bumper-to-bumper traffic.

The Quick Clearance Law is one of many congestion management and safety approaches for reducing the amount of incident-related congestion and protecting first responders working the scene of the crash. The Central Oklahoma Traffic Incident Management Effort (COTIME), the incident management committee in the region, encourages drivers in a crash to take note of their surroundings and make the wisest and safest decision that will result in fewer incidents or injuries related to minor traffic incidents. COTIME encourages citizens to heed the Quick Clearance Law as a tool to actively participate in reducing the amount of roadway congestion attributed to small, minor crashes.

Below are visualizations of crash-related data for the Central Oklahoma region created by ACOG using data from member local governments, the Department of Public Safety and the Oklahoma Department of Transportation. 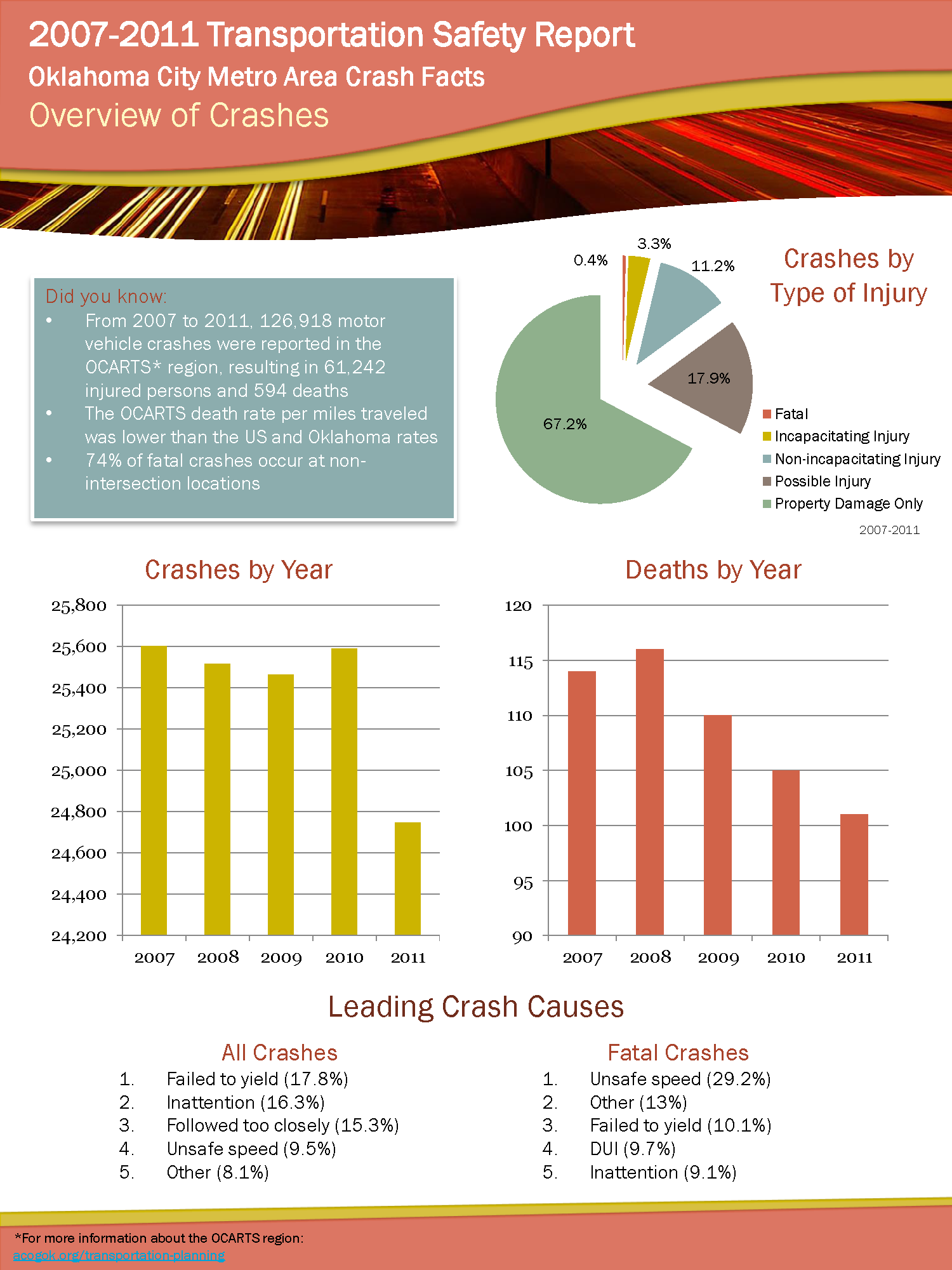 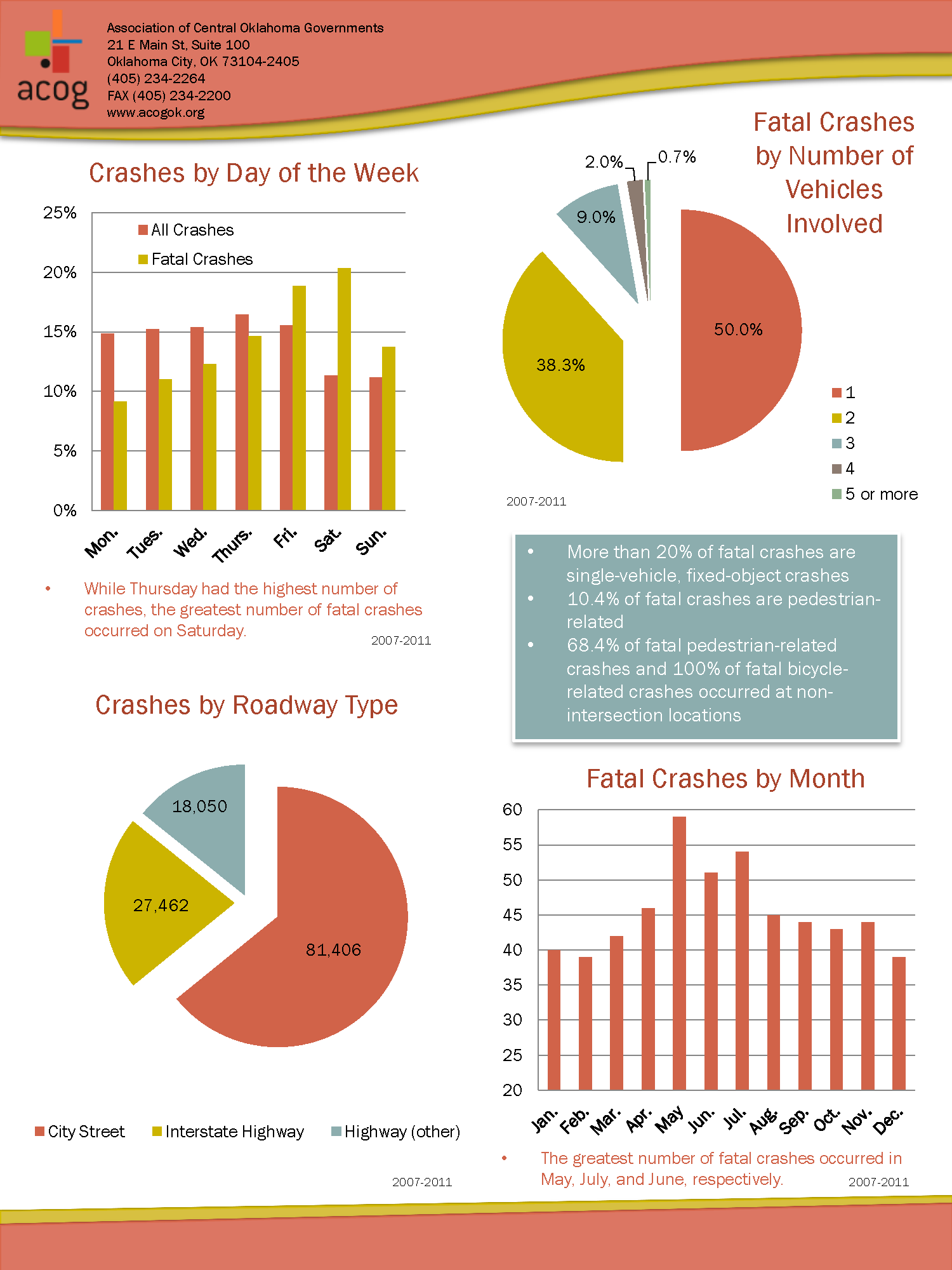