These temporary public parks, called “parklets”, will pop up across Central and Northwest Oklahoma City in front of or at the following locations: 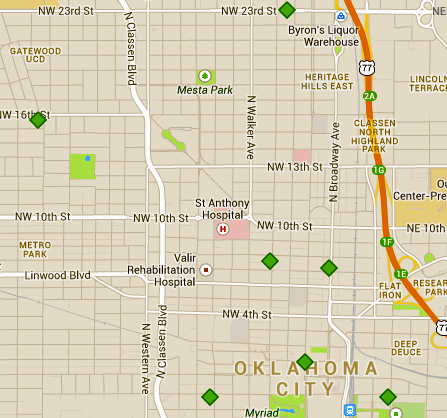 Click here for an interactive map of PARK(ing) Day locations in Oklahoma City.

You can click here for an interactive Google Map of the locations listed.

PARK(ing) Day began in 2006 in San Francisco by an arts group using funds from the Trust for Public Land. PARK(ing) Day is intended to call attention to the need for more urban open space, generate critical debate around how public space is created and allocated and to improve the overall quality of urban human habitat.

The effort to include Oklahoma City in PARK(ing) Day 2013 is led by Better Block OKC, the volunteer organization similarly responsible for bringing the annual Better Block tactical urbanism event to Oklahoma City. Still in the process of planning, anyone interested in volunteering can contact Better Block OKC for more information or to be put in touch with a district team leader.