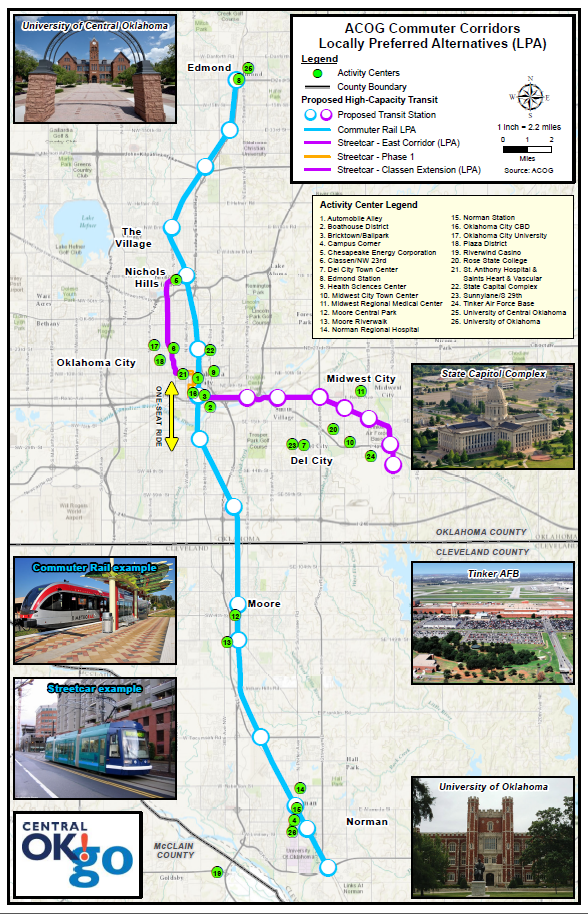 The North Corridor, connecting downtown Edmond with the downtown Oklahoma City Santa Fe Intermodal Hub, was recommended to be served by commuter rail.  Existing BNSF right-of-way would be utilized wherever possible along the 14-mile alignment. Additionally, a five-mile extension of the MAPS3 streetcar is recommended to run along Classen Boulevard from NW 10th and Walker Avenue to provide a connection to a future commuter rail station near the Chesapeake Energy campus. Capital costs for commuter rail are estimated between $260 million and $360 million, with the streetcar route expansion estimated between $270 million and $370 million. Ongoing operating and maintenance costs are estimated at $5 million/year for the commuter rail and $2.5 million/year for the streetcar extension.

The South Corridor recommendation would connect the downtown Oklahoma City Santa Fe Intermodal Hub and Norman extending to State Highway 9 via commuter rail. Existing BNSF right-of-way would be used as available along the 17-mile route. The combined alignments of the North and South Corridors would allow for a one-seat ride between Norman and Edmond. Capital costs for this commuter rail between Norman and Oklahoma City are estimated between $310 million and $410 million, with an estimated annual operating and maintenance cost of $5.5 million/year.

The East Corridor recommendation would connect Tinker Air Force Base, Midwest City and Del City to the downtown Oklahoma City Santa Fe Intermodal Hub via streetcar and would need to include development of an internal circulator on Tinker Air Force Base. Capital costs for this 9-mile streetcar are estimated between $320 million and $440 million. This alignment would make use of abandoned railroad right-of-way in Midwest City and use Reno Avenue to provide direct access to the intermodal hub for connections to the MAPS3 streetcar and future commuter rail services to Edmond and Norman.

While it could be at least 20 years before a fully operational regional transit system is established in Central Oklahoma, the RTD Steering Committee’s leadership and foresight have strategically positioned the region for a prosperous and competitive future through high-capacity transit investments.