The “Bridges of Canadian County” 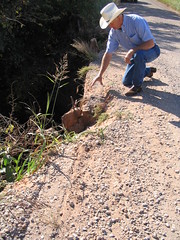 Robert Kincaid wasn’t there to take photographs, but a host of luminaries, led by Canadian County Commissioner Phil Carson, were present at a ribbon-cutting for a new bridge on Sara Rd NE south of Azalea NE/248th/Waterloo Road. Funded with federal stimulus dollars, the bridge was completed in late March.  ACOG awarded the stimulus funds to District 1, which was a prime candidate because engineered bridge plans and acquired right-of-way made the project “shovel-ready.”

The bridge that was replaced was built in 1916 and would only accommodate one lane of traffic. Steep hills on both ends of the old bridge made it even more hazardous. In an area with steadily increasing population, Carson (shown here at the bridge in fall 2005) believed this was the most dangerous bridge in his district. Commissioner Carson acknowledged that building this bridge was a “team effort” and praised the players: ACOG, the Oklahoma Department of Transportation, County District 1 workers, and the City of Piedmont. 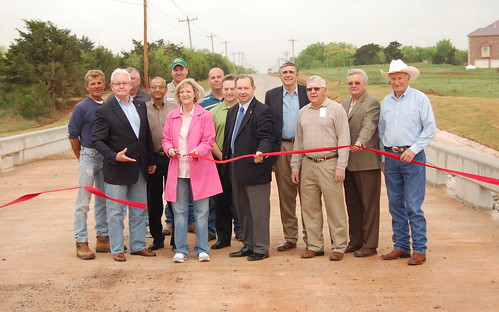