But this is a very inaccurate picture of what an aquifer is. The surface elevation of a lake is almost always the same (except for very large lakes such as Lake Superior). The water table in an aquifer will almost always be different in different parts of the aquifer. A water well can dry up an area of the aquifer surrounding it; this is impossible to do with a lake without drying up the entire waterbody. Surface and lake water move in terms of hours and days; groundwater moves in terms of years and centuries.

In addition, one must consider that there are many aquifers. The aquifer that is a surface water source in one county could be a completely different aquifer a few miles away in the next county. And sometimes one aquifer can overlie another aquifer. This is common near large rivers – the aquifer that usually borders the river (called an alluvial aquifer) can be on top of a deeper aquifer (a bedrock aquifer). 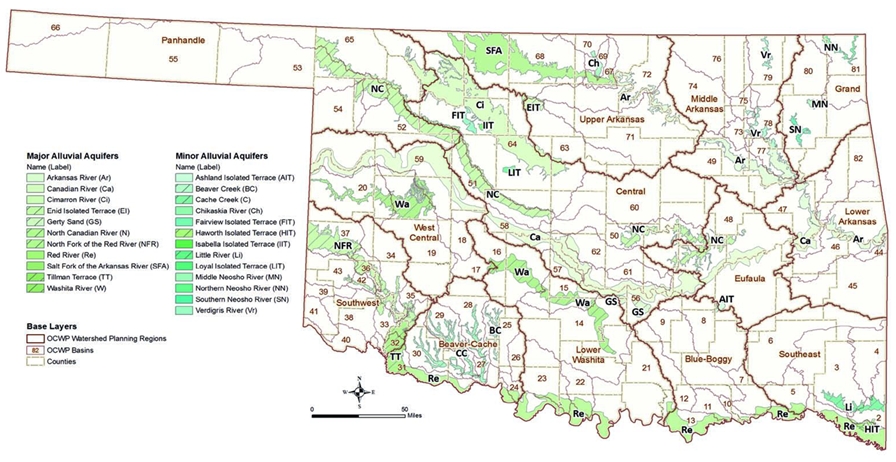 The above two figures are maps of aquifers in the state of Oklahoma. As you can see, there are ten major bedrock aquifers in the state and eleven major alluvial aquifers. Knowing what aquifer you are on is important for many practical reasons, such as how deep to drill a well, what kind of water quality one can expect, and how much water can actually be pumped from a particular location.