The Garber-Wellington Aquifer is a major bedrock sandstone aquifer in Central Oklahoma. Also referred to as part of the Central Oklahoma Aquifer System, it is comprised primarily of rocks from the Lower Permian-age Garber Sandstone and Wellington Formations (Simpson, 1973). The total thickness of the combined formations is about 1,000 feet. Depth to water varies from less than 100 feet to 350 feet; saturated thickness ranges from 150 to 650 feet. Non-domestic wells completed in the aquifer can yield as much as 600 gallons per minute (gpm) but generally yield from 200 to 400 gpm.

The Garber-Wellington aquifer is an important source of domestic and public water supply. The aquifer is overlain in places by alluvial aquifers along the North Canadian and Canadian Rivers. Water is available from both aquifers. With the exception of Oklahoma City, all the major communities in central Oklahoma rely either solely or partly on groundwater from the Garber-Wellington (OWRB, 2012).

Location of the Garber-Wellington Aquifer

The Garber-Wellington aquifer is located in Logan, Oklahoma, and Cleveland counties. It is part of a larger unit called the Central Oklahoma Aquifer, which includes a geologic unit called the Oscar Formation in Lincoln and Pottawatomie Counties. 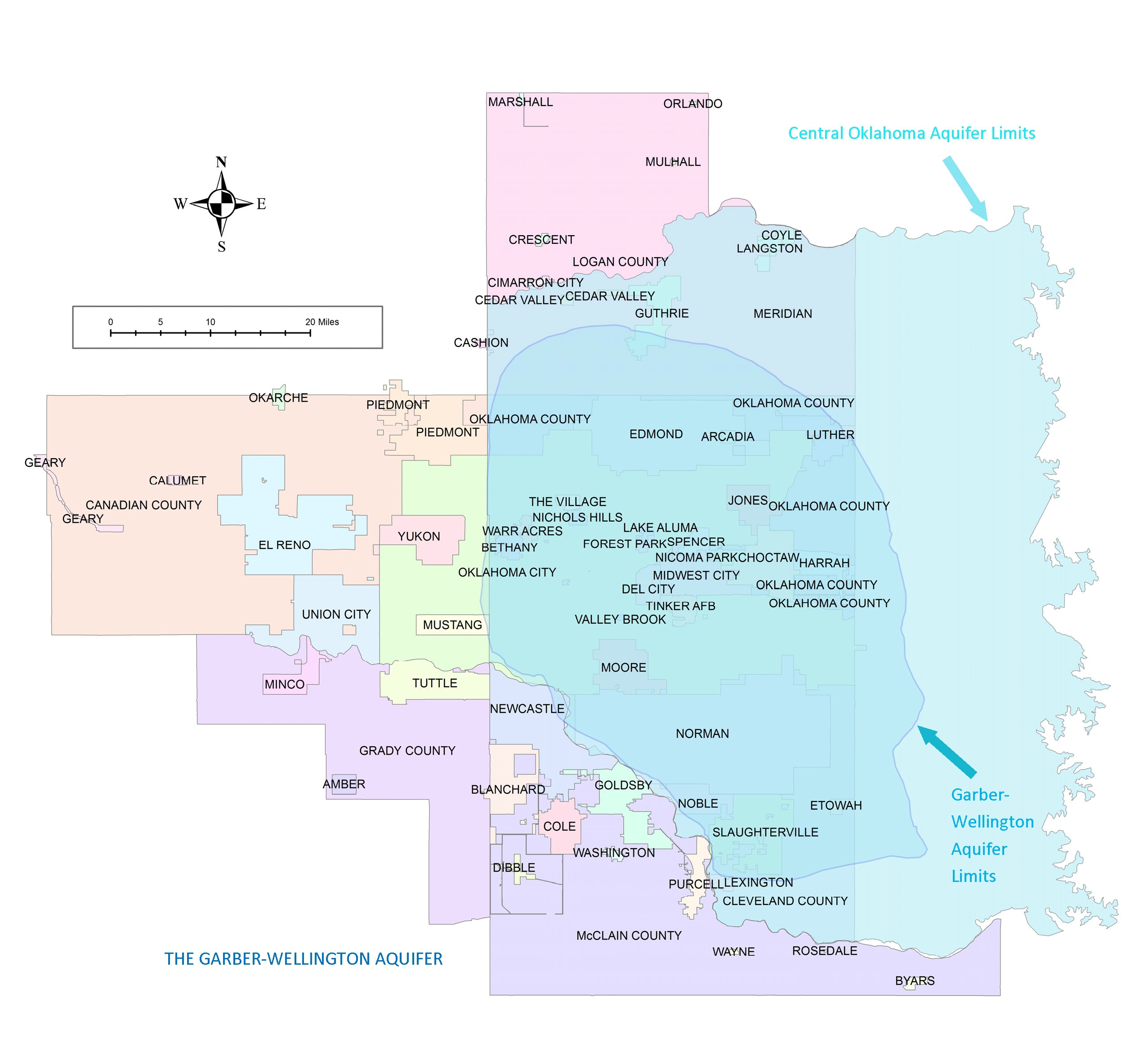 The Garber-Wellington aquifer is composed of interbedded sandstones, shales and traces of carbonates. Below is a photograph of a typical Garber Sand-stone outcrop one can see along a highway in central Oklahoma. There are major sandstone channel fill deposits with associated levee and splay deposits off the main channels. These channels are associated with interchannel shales.

Freshwater carbonates formed most likely as caliche in the arid environment of the Lower Permian (McBride, 1978). These caliche beds were reworked in pebble conglomerates in the base of the fluvial sediments. The sands are fairly uniform and very fine.

Productive water sandstones have a measured porosity range from 25-35% and transmissivity from 5,000-8,000 gallons per day per foot (gpd/ft). In examining deep (exceeding 600 feet) Garber-Wellington wells, in non-depleted areas one can expect to get 1.2-1.7 gallons per foot of aquifer exposed in the well bore. There are few impurities in this terrestrial clastic system. There are a few rare hematite deposits where iron appears to have concentrated along weathering zones, and even rarer dolomite deposits, which could have been caliche, deposited in the same environment.

The rocks in the outcrop may seem like a succession of flat layers of interbedded shales and sandstones, but the rocks actually have a small tilt westward. This regional tilted geometry or dip is about 35 to 40 feet per mile in most locations. The result of this orientation is that one can be standing on Garber Sandstone on the east side of Oklahoma County, but on the west side of the county one has to drill nearly 400 feet through the Hennessey Shale to reach the top of the Garber Sands. This geometry defines many important aspects of the aquifer, including well yields and water quality. A block diagram showing this geometry is shown below.

Not a Lake, but a Sponge

The aquifer is large, about 1500 square miles covering about two counties. If we were to assume an average depth of 400 feet and an average porosity of 20 percent, this would be a storage capacity of around 25 trillion gallons. Considering Lake Thunderbird in Cleveland County has a storage capacity of 34 billion gallons, the aquifer holds the equivalent of 736 Lake Thunderbirds.

That may seem like a lot of water, but problems start when one tries to get the water out of the aquifer. Remember the sponge analogy. A water well is like a straw stuck in the sponge. One can suck the water out of the sponge with a straw only for a short time before the area around the end of the straw goes dry. In a similar fashion, water is depleted from the rock around a well and dries up.

This is referred to as the cone of depression, as shown in the figure above. The area that a well can influence depends on a number of factors, including pump rate and geology. The faster the well pumps, the more area around the well is depleted. Note also that the amount of water in the well bore also depletes. This can cause trouble if the pumping is so great that the water level declines to the pump itself. If the pump has a shut-off switch, the pump will turn off, and the water level will increase back to pre-pumping levels. If there is no switch, the pump will burn out. A good well should not overpump. One should pump at a rate that balances the amount of water coming out of the well with the amount of water coming from the aquifer into the well bore. Over pumping in many cases will cause pumps to overheat and burn out.