Why Transit Matters: The Environmental Benefits of Public Transportation

Health
Air pollution is becoming a major environmental health problem for the whole world.  According to the EPA cities with high amounts of particulate matter and ground-level ozone can cause very serious health impacts for those in the region.  Populations exposed to poor air quality experienced decreased respiratory health, increased cases of pneumonia, premature death, cancer, and other diseases.  Since poor air quality affects everyone, a solution to the problem is in the region’s best interest.

Increased use of public transportation can help reduce air pollution and the health benefits that accompany it.  Public transportation produces far fewer quantities of air pollutants, like carbon monoxide, carbon dioxide, and nitrogen oxides, per passenger mile.  Public transit reduces the number of single occupancy vehicles on the road, which reduces the amount of pollutants entering the air.  In addition, most public transit does not have door to door service, meaning that riders have to walk a few blocks to get to a transit stop and to their final destination.  Both of which reduce vehicle emissions.

A study conducted following the 1996 Atlanta Olympic Games found that expanded public transportation services reduced peak auto use by 22.5% and led to decreased amounts of mobile source emissions from single occupancy vehicles.  During the Games, emergency rooms and hospitals saw a 42% decrease in the amount of asthma related admissions because of the lower levels of air pollution.

Fuel Efficiency
Single occupancy vehicles have the one of the lowest fuel efficiencies per rider of any form of transportation.  A full size diesel powered bus with as few as seven passengers offers a fuel economy greater than the average car.  A fully occupied bus has a fuel efficiency that is six-times greater while a fully occupied train car has a fuel economy 15-times greater than the average single occupancy auto.   By increasing ridership on public transportation, huge amounts of fuel can be saved while also reducing the amount of air pollution.

In Oklahoma City, the average commute is about 15 miles and the average car gets around 20 miles per gallon.  Therefore, the average commuter spends about 5 dollars a day in gas on their daily commute (1.5 gallons total at $3.25/gallon).  If an Oklahoma City resident were to commute to work twice a week using public transportation, he or she would save 156 gallons of gas and over $500 per year.  If your commute is longer, or if gas prices rise, the savings could be even greater.

Cities with robust bus networks see much higher ridership than they do in Oklahoma City.  The Salt Lake City metro area has a population of 1,123,712, which is only about 100,000 less than the Oklahoma City metro.  Salt Lake, however, has a much more extensive transit system that includes bus, commuter rail, and light rail.  In 2010 the Utah Transit Authority had an annual transit ridership (over all modes) of 36,507,282 rides and 221,880,786 passenger miles traveled (6.1 miles per ride).  Assuming the average fuel economy of the cars in Salt Lake City is 20 miles per gallon, we can reason that the region saved about 11,100,000 gallons of gas in 2010.  This means that Salt Lake City residents saved over $36 million on gas in 1 year.

Air Pollution Reduction
Regardless of the type of fuel that a public transportation vehicle uses, riding the bus or taking a train helps to reduce air pollution.  For every person who leaves their car at home and decides to take a bus or a train, the amount of harmful pollutants entering the air decreases.  When compared to single occupancy vehicles, public transportation produces 95% less carbon dioxide, 92% fewer volatile organic compounds, 45% less carbon dioxide, and 48% less nitrogen oxide.  When these pollutants enter our atmosphere they contribute to global warming, smog, acid deposition, and health problems. 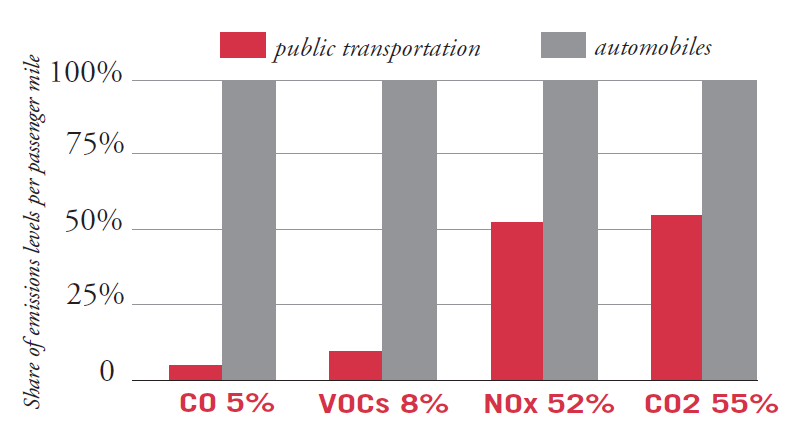 By implementing a more reliable and user friendly transit system, the Oklahoma City region could help to improve our air quality.  Getting people to leave their car at home once or twice a week could have incredible impacts on the air quality of our region.  The quality of our air affects the entire region.  Even those who will never take the bus will benefit from the cleaner air associated with higher public transportation ridership.

With an enhanced public transportation system that encourages commuters to take a train or a bus to work, the Oklahoma City region can come closer to staying in air quality attainment and help reduce fuel consumption.  Those environmental benefits also translate into health benefits, like fewer cases of respiratory diseases, asthma, and cancer, for the residents of the region.  In the final piece of the series we will talk about how a great public transit system leads to a city with a higher quality of life.